SPANISH EYES ON MEATH IN BARCELONA! 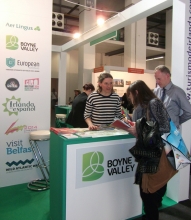 11 April 2014 – Tourism organisations from around Ireland – including Rock Farm Slane and Slí na Mí (tour guide based in Athboy) – travelled to Barcelona over the weekend, to join Tourism Ireland for SITC 2014 – the largest holiday and travel show in the Catalonia region of Spain.

SITC (Saló Internacional del Turisme de Catalunya) attracts over 200,000 visitors each year, including decision-makers from the English language-teaching (ELT) sector, travel media, tour operators, travel agents and business tourism buyers, as well as many thousands of holidaymakers looking for ideas and suggestions for their next short break or holiday destination. One of the most affluent parts of Spain, Barcelona and its hinterland are the largest source of all outbound travellers from Spain – and second only to Madrid as a source of Spanish visitors to the island of Ireland.

The three-day event provided a valuable opportunity for the participating Irish companies to showcase and sell their product and do business with the Spanish travel professionals in attendance. It also provided a really good platform for Tourism Ireland to highlight the ease of access to the island of Ireland from this part of Spain – with direct flights from Barcelona to Dublin, Cork and Belfast, as well as flights from nearby Girona and Reus to Dublin and Knock. The Wild Atlantic Way, the Causeway Coastal Route, as well as major events like the Grande Partenza of the Giro d’Italia and Limerick City of Culture 2014, were some of the themes highlighted by Tourism Ireland at this year’s SITC.

Barbara Wood, Tourism Ireland’s manager in Spain, said: “2013 was a record year for Spanish visitors to Ireland and we are undertaking another busy programme of promotional activity throughout 2014, to keep the momentum going and build on that growth. Interest in visiting Ireland remains strong, with Spaniards consistently ranking Ireland in their ‘top ten’ destinations to visit. Our presence at SITC provided an excellent opportunity to spread the word about all the great things to see and do in Ireland and, in particular, to highlight the Wild Atlantic Way to prospective Spanish visitors. We believe this exciting new tourism experience will have tremendous appeal in the Spanish market.”

Tourism Ireland’s online advertising campaign will reach an estimated 16.5 million Spaniards; the campaign will run from April to July, taking advantage of late booking patterns among Spanish holidaymakers. The organisation will also co-operate with airlines Aer Lingus, Ryanair and Iberia Express, later this spring, to highlight great airfares to the island of Ireland. Co-op campaigns – involving a mix of online, TV, radio and outdoor advertising – will be undertaken with leading online travel agents like eDreams, Logitravel and Rumbo. And Tourism Ireland will also team up once again with one of the biggest brands in Spain – the tour operating arm of Spanish retailing giant El Corte Inglés – for a joint promotional campaign in May, targeting millions of potential holidaymakers through billboard ads in metro stations in Madrid, as well as radio ads and in-store promotions. Tourism Ireland also operates a busy, year-round programme of PR activity, which includes visits to Ireland for key Spanish travel and lifestyle journalists.