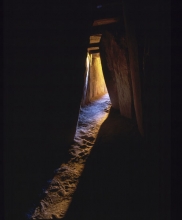 Please note there is no live stream in 2020

Every winter solstice (21st December),  the shortest day of the year, something truly extraordinary occurs in the Boyne Valley. On this morning, and on the days around it, the rising sun shines across the river and up into the world famous Neolithic passage tomb at Newgrange. The long and narrow passage is perfectly aligned with the sunrise. This amazing feat of engineering was constructed around 3200BC, making it the oldest astronomically aligned structure in the world. The dawn light enters through the roofbox, a small opening above the entrance to the passage, and creeps slowly up the passage before illuminating the chamber at the end of the passage, the sunlight playing across the beautifully carved stone artwork. The sunlight then retreats back down the passage for another year.

In 1967 Professor M. J. O’Kelly, who was excavating the site, first observed the winter solstice alignment, and this became a key part of his interpretation and reconstruction of the tomb. The solstice is believed to have been an important date for the prehistoric people of Ireland 5000 years ago, marking the end of one year and the beginning of another. Some also believe the sunlight represents a heavenly bridge, allowing the spirits of those buried in Newgrange to reach the afterlife.

Nowadays Newgrange is known across the globe for its winter solstice alignment and tickets to the sunrise event are some of the most sought-after in Ireland and beyond.  Visitors to the Brú Na Bóinne Visitor Centre enter a raffle and a small number of lucky winners are selected. In 2017 there were 32,522 entries for the raffle. For those without a ticket another option now exists, in fact one that anyone across the world can enjoy!  In 2017 viewers can watch a live video stream of the sunlight (weather dependent) shining into the passage.

Alternatively, you can also watch the live stream below when it is available:

You can also take the Winter Solstice Quiz on Facebook by clicking here.

Happy Solstice from everyone at Boyne Valley Tourism!