The Winter Solstice at Newgrange Skip to main content

The Winter Solstice at Newgrange 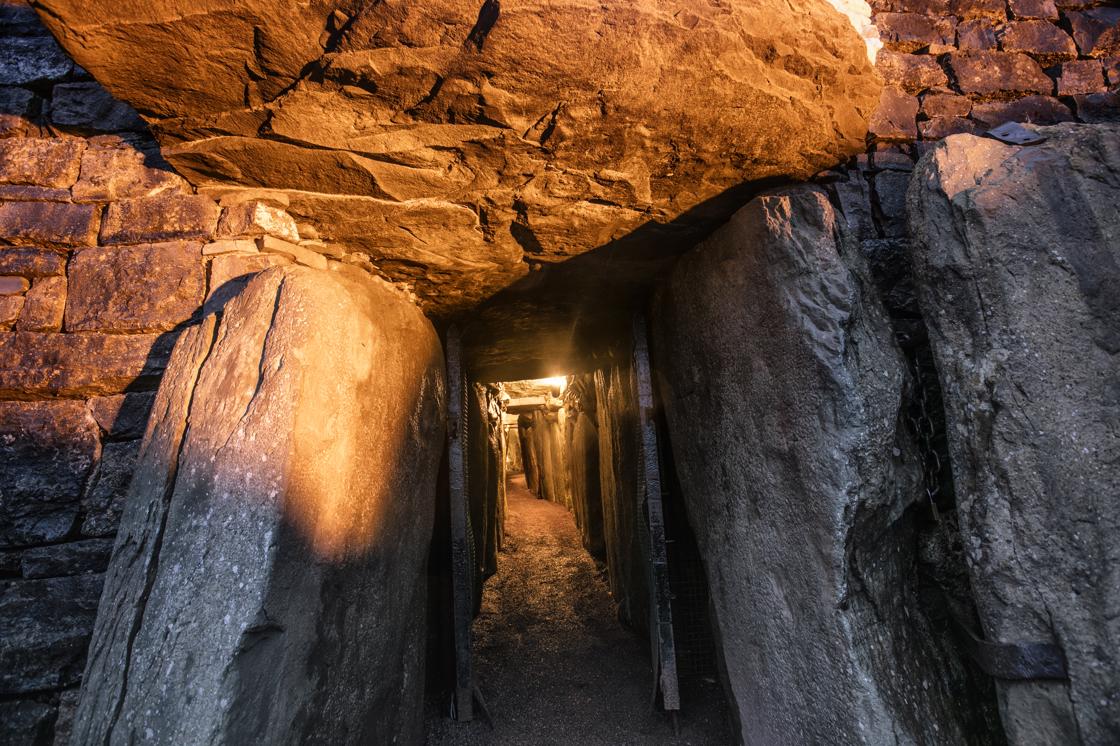 Sometimes called the jewel in the crown of Ireland’s Ancient East, Newgrange  is a well-known 5,200 year old passage tomb in the Boyne Valley. It was built by stone age farmers who would have prospered in the rich lands of the region. What is most striking about this monument is that when it was built, it was aligned with the rising sun on the mornings around the Winter Solstice. Why or how these early farmers built the tomb in such a way is still a mystery. (Some writers have suggested that when the light hits the spiral motif on back slab in the chamber it opens the vortex into the ‘other world’ to let the dead complete their journey from this world to ‘the other world’ (Jones, 2007, 157).) 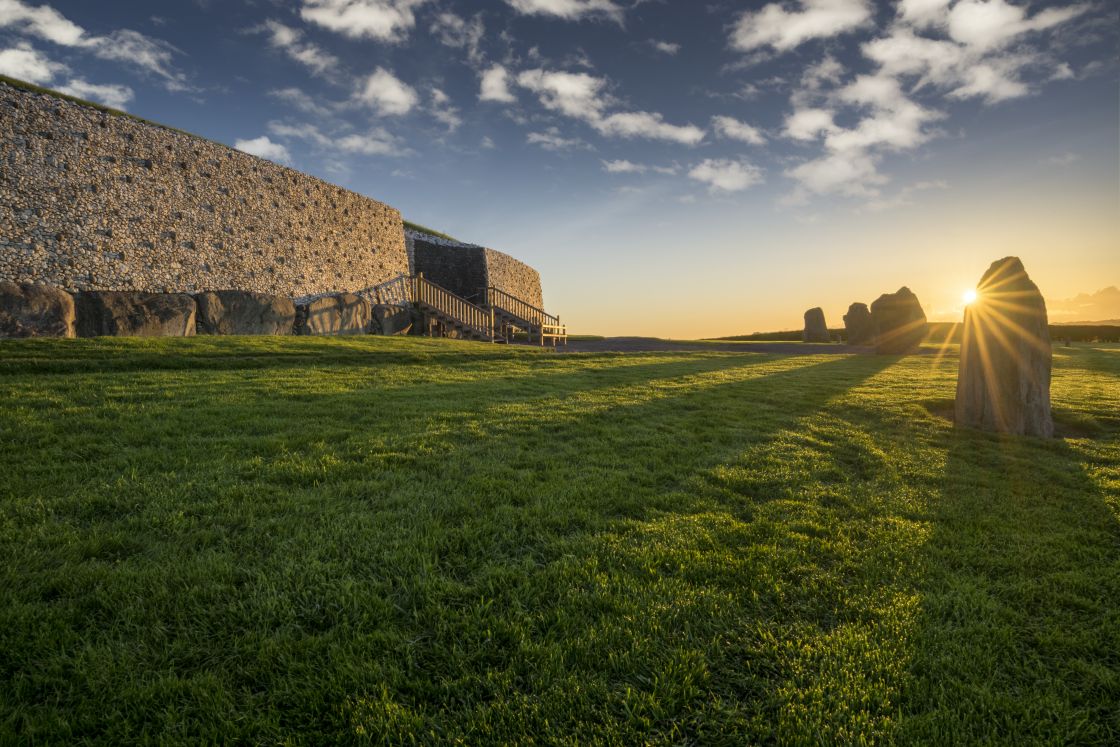 Newgrange was rediscovered in 1699 by workers that were moving stones for landowner- Charles Campbell. You can imagine their shock and surprise when the tomb was uncovered. Since then, Newgrange and the tombs surrounding it (Knowth and Dowth) have been explored, investigated, and excavated by many archaeologists.
In 1962 Professor M.J. O’Kelly of University College Cork undertook to carry out extensive archaeological excavations on behalf of the Office of Public Works. Even before this, it was locally known that the tomb filled with sunlight at sunrise on the winter solstice, yet no one had ever experienced it. With the discovery of the roof-box and the orientation of the tomb to face southeast O’Kelly suspected that, like Stonehenge, their purpose may be connected to the astronomical calendar. O’Kelly set out to investigate this further and on the 21st of December 1967 O’Kelly and his team were the first to observe and experience the illumination of the passage tomb by the sun rays since prehistoric times (O’Kelly 1982).

Experiencing this phenomenon has been restricted to a lucky few since 1967. The weather plays a big part as to whether sunlight will reach the chamber at Newgrange but since the year 2000 the Office of Public Works introduced an annual lottery for those sought-after spots. Clare Tuffy, Manager of the OPW Bru na Boinne Newgrange and Knowth explained how the lottery is drawn each year (prior to Covid restrictions).
“Thirty children from our local schools - Slane, Donore and Knockcommon National Schools, come into the centre in a flurry of excitement after being collected from school by one of our Brú buses. They pick out 120 names from the large number (28,595 for Solstice 2018) of application forms spread out on the floor. The first 60 names drawn are offered the initial places on the six days we are open for dawn. The other 60 are put on a reserve list.” Read more on behind the scenes at the Winter Solstice here. 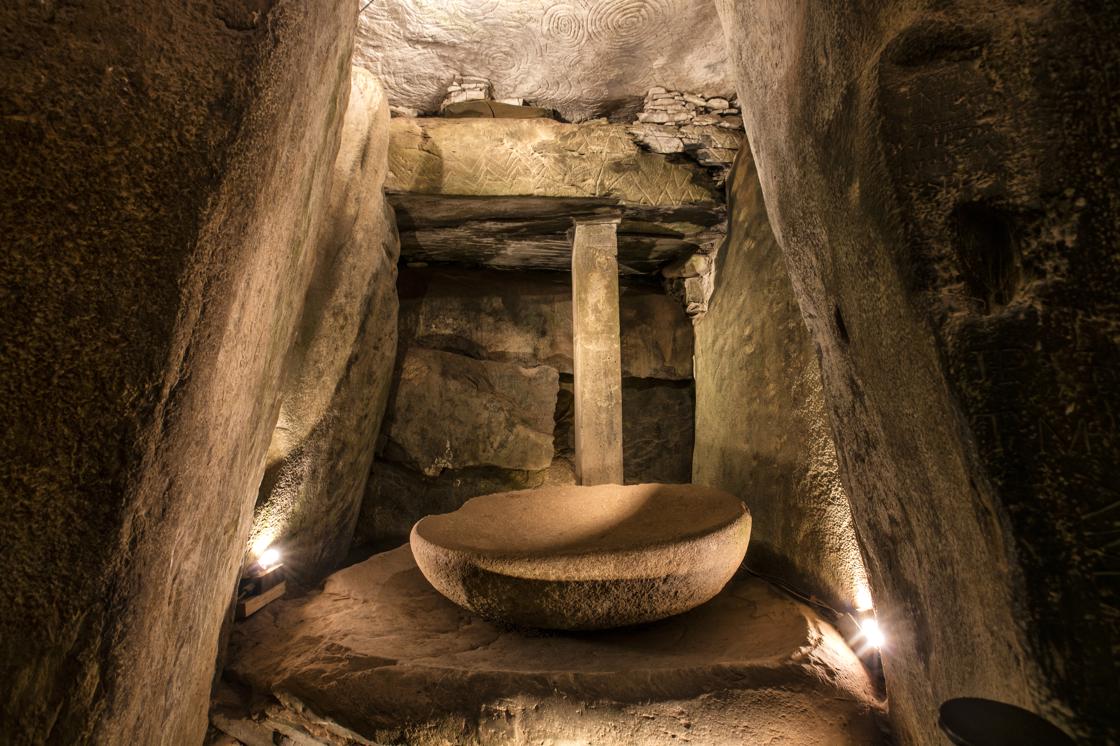 Of course, in 2020 the lottery did not go ahead due to Covid restrictions. Instead, the OPW live-streamed the hugely significant Solstice Sunrise event. People from all over the world were once again able to experience this wonderful phenomenon from their homes. December 21st, 2020 was a beautiful morning in the Boyne Valley and the sun did not disappoint. You can watch the full recording of the event below.

In line with the current Government Guidelines, the Newgrange chamber is currently closed to visitors, therefore the Office of Public Works will once again live-stream the Winter Solstice for all to view. They will be streaming live on the video link at 8:45am (GMT) on the 20th, 21st and 22nd December, so make sure to join us to view the spectacular phenomenon and learn some fascinating facts. We hope to see a return of the lottery for Winter Solstice at Newgrange in 2022 but in the meantime, plan your visit to Newgrange and Knowth through the Bru na Boinne visitor centre during their opening hours.

Members of the public are advised not to travel directly to the site, as there will be road closures in place around Newgrange itself.

Visitors may enter through the Visitor Centre prior to travelling to the Monument. However, in adherence with the Government Guidelines, OPW must remind visitors that the wearing of face coverings within the Centre and on the buses is obligatory.

In line with the revised Government Guidelines, Brú na Bóinne Visitor Centre and the site at the Newgrange Monument – though not the passage tomb itself – are currently open to visitors. Access to the site is only available through the Visitor Centre, which is open daily from 9am to 4pm. For further information and online booking, please visit heritageireland.ie

Category
Unique to the Boyne Valley